They're not quite done yet, but this is what I've been working on this week for my swap at our team meeting on Sunday.  A while back I purchased a 'Scrapbook in a Box' project from another demonstrator as it used my favorite, the Petal Party Simply Stampin' kit.  I offered this project with my FLEX class students and it went over quite well.  For that one, I used card stock and patterned papers that I had on hand before I became a Stampin' Up! demonstrator (I'm such a paper hoarder!).  We decorated the box tops with the Flower Folds Bigz XL die and a 1 3/8 inch circle in my FLEX class.  This time around, I used several papers from the Sweet Pea DSP Pack, as well as two of my favorites, Cottage Wall and Razzleberry Lemonade.  Our swap theme is to use punched/die cut flowers to decorate this month's project, which can either be the punch/die cut itself, or a flower created using punches/die cuts.  I'd seen these beautiful paper roses on Gretchen Barron's blog, and I got the link to Julie Wiliams' tutorial for these beauties from Gretchen's blog.  I knew I wanted to use those flowers in my project, so I decided to put them on the center panel of the scrapbook inside the box so they wouldn't get crumpled.  I used the same flower die on the lids, but added sponging on the petals, and added some rose leaves I had on hand, left over from my Mom and Dad's 50th wedding anniversary party (wow, that's nearly 2 years ago!).  I kept the inside pretty basic to allow the gals to add lots of pictures to their scrapbook page.  I hope they like them! 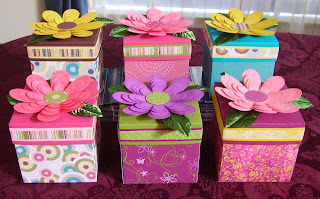 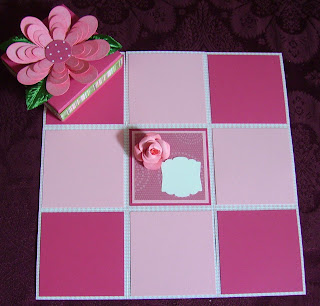 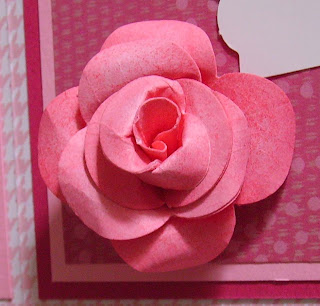 It's been a busy February and March.  I was on a jury for 16 days in February (my first time), so I had very little time to do any stamping between being in court and then writing lesson plans for my subs.  I was originally called for the week of Thanksgiving, but I didn't want to spend my vacation on jury duty, so I postponed it until the end of January.  I was one of the first 18 called up to the jury box, and the judge and attorneys didn't ask me much, which I knew meant I'd likely be selected.  Unfortunately for my students, we couldn't get one person who would be available to cover all of my court dates, and I ended up with 4 different subs.  Let me tell you, my kids were happy to see me when I was back for good.  The trial was interesting.  It was a murder case, and a difficult one at that because of the circumstances involved.  After two days and another hour or so of deliberating, we ended up with a verdict of involuntary manslaughter.  I was amazed how emotionally drained I was when I got home after the verdict was read.  It was also tough saying goodbye to those 11 people I'd been hanging out with during the course of the trial.  We went through a lot together those last couple of days.  I just hope that the defendant makes some lasting changes in his lifestyle so that this type of unfortunate incident doesn't happen again.  What was the toughest was knowing that no matter what we decided, nothing would bring back the victim, and I know his family was upset that we didn't find the defendant guilty of first degree murder, but the evidence and testimony in the case didn't support that.  It was a good first jury experience - I just wish it had been for a shorter trial.  I had to laugh, though - my hubby got a jury summons during the last part of the trial, which he's put off until state testing at school is over.

I'm starting my second week of Spring Break.  Last week my DH and I spent three nights at the Venetian in Las Vegas.  We saw Rita Rudner one night, sat out by the Venetian pool one afternoon and had a nice dinner at Benihana over at the Las Vegas Hilton.  It was nice to have some time just for the two of us.  Our girls stayed with our youth director at church again, and they had a good time even though they were there on three weekdays.  Next time Jean said she'd love to have them for a weekend day to hang out together.  It's nice to have someone to leave them with so we can spend some quality time together now and then.

I did get some stamping time in this weekend at my friend Erin's.  My upline, Jeanne, does a stamp camp for Erin each month, and it's fun to get to see the stamping friends I've met there each time I can make it.  The theme was butterflies, featuring the Flight of the Butterfly stamp set, as well as the butterflies die and emboslet.  We got to choose ahead of time which card design we wanted to make, as well as how many, which is cool.  I've been doing the same with my own stamp campers at work, and I think they like being able to pick and choose.

Right now I'm working on my swaps for our team meeting on Sunday, and I'll share some pictures once I've got them done.  Speaking of my swaps, I'd better get off the computer and work on them... thanks for stopping by today!
1 comment: 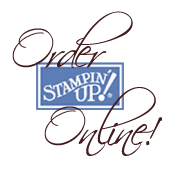 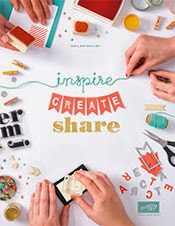 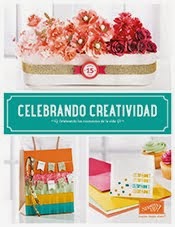